Kovilj Monastery also known as ‘Jewel of Bačka’ is located in northern Serbian province Vojvodina near Novi Sad. This Serb orthodox monastery in the Bačka region was founded by the Serb archbishop Saint Sava in the early 13th century. It is considered as one of the most colossal cultural-historical objects in Bačka because of its unrivaled beauty and architecture. Since 1949, it has been protected by the state as the cultural monument. The monastery is also famous for producing a variety of products such as rakija, white basil honey, juices, jams, herbal balms, etc. It produces a variety of brandies made from plums, quince and green nuts. During 1996-2007, the monastery gained media attention when episodes of Bukvar pravoslavlja were shot in Kovilj and hosted by the hegumen of monastery.

In 1217, Grand Župan Stefan was crowned as the King of Serbia by the papal legate. It made king Andrew II of Hungary angry and he attacked Stefan considering Serbia its liege. He encamped at modern Kovilj, which was the territory of Hungary back then. Stefan’s brother Saint Sava approached Andrew and initiate diplomatic talks to make them reconcile and prevent war. To memorialize this historical event, Saint Sava founded the monastery in 1220. There are different theories about who really founded the monastery. In the 17th century, a Turkish traveler visited the region wrote that the monastery was founded by Serbian king, Stefan Dragutin. Another one claims that it was built on the ruins of the Franciscan monastery from 1421 but all the claims are still unverified.

In the 14th century, Kovilj was mentioned for the first in the Munich Serbian Psalter as having joint properties. In the 17th century, the monastery was demolished by the Ottoman Empire during the war with Austria. The church was burnt four times which was restored by the remaining monks with the support of people, who then start settling in the area from other parts of Hungary. Finally, the monastery was renewed in 1705-1707.

The construction of the stone church was completed in 1749. It was inspired by the Serbo-Byzantine architecture and decorated after Manasija and Ravanica. In 1758, a document was issued by Maria Theresa, which divided the land between the monastery and Koviljski Šanac. The Serbian settlements around the monastery were conserved and repopulated which played a major part in the prosperity of the monastery.

In 1849, the monastery was used by the rebels as their base and the monks were forced to move into the Syrmia region. After the collapse of the rebellion, the monastery was burgled and burned and many historical treasures were lost as well. The new church faced some serious damage while the old church was completely ruined so it was demolished in 1850. The monastery was restored by the contribution of the Austrian state, Russia, and donations from locals.

After the renovation in 1950, the monastery collected a new historical collection of assets such as treasured books and manuscripts, musical literature from 18th and 19th centuries, paintings of Uroš Predić and Rafailo Momčilović, etc. The highlights of the monastery are its spacious rooms, antique furniture, stoves, chandeliers, etc. It also has a modern dining room and an ophthalmology cabinet. You will certainly find this place peaceful and mentally soothing.

VISIT KOVILJ MONASTERY ON A PRIVATE DAY-TRIP TO NOVI SAD

If you are interested to visit Novi Sad in a day-trip from Belgrade you can also visit those places nearby:

CHECK PRIVATE TOUR FROM BELGRADE TO NOVI SAD INCLUDING KOVILJ

Petrovaradin Fortress The Petrovaradin fortress is the most recognized historical and cultural heritage to visit in Novi Sad, Serbia. It is a signature city attraction for tourists. It is situated on the right bank of Read more… 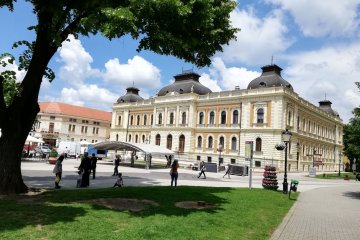 Novi Sad is the second biggest city of Serbia and the capital of the Vojvodina region, which is the Northern region and it’s made of 26 nationalities. The most dominant ones are Serbian and Hungarian. Read more…