Novi Sad is the second biggest city of Serbia and the capital of the Vojvodina region, which is the Northern region and it’s made of 26 nationalities. The most dominant ones are Serbian and Hungarian. It is just 74 kilometers of the capital Belgrade and downriver from Budapest. The city lies on the banks of the Danube river and numerous international tourist cruisers stop in its harbor. Novi Sad is a combination of breathtaking architecture, charming bars, and restaurants. It is a home of the famous EXIT music festival, one of the best in Europe that brings together the best musicians from around the world.  Novi Sad is the European Youth Capital of 2019 and the European Capital of Culture for 2021.

The city was found in the 17th century after the Serb merchants build a colony across the Danube from the Petrovaradin Fortress because the Habsburg empire was affiliated with Roman Catholic doctrine and it prohibited the people of orthodox religion from living in Petrovaradin. Serbs of the area found the new place to live in the left bank of Danube. The city was initially called as Serb City. In 1918, the inhabitants were resettled in Petrovaradinski Šanac. The population was comprised of 112 Serbian, 14 German, and 5 Hungarian houses. In 1748, the city gained its official name Novi Sad after becoming a Free Royal City.

Later it was transformed into a significant trading and cultural center famous by the name of Serbian Athens. After being severely bombarded and devastated during the Revolution of 1848-49, it was rebuilt and reinstated. Novi Sad is known as the financial and industrial center of the Serbian economy.

In terms of architecture, Novi Sad is no different than any other typical Central European town. After the city was rebuilt the architecture from the 19th century dominates the city center. The new blocks were around the city core and streets were widened. The contemporary and multi-story buildings have replaced the small old houses. To replace the radial structure of the city many boulevards were constructed in an orthogonal manner such as Bulevar Oslobođenja and major communication lines were established. These developments played a significant part in the uncambered growth of the city. Since the 1950’s the population has almost tripled.

Make time to visit the Museum of Vojvodina located inside the former Gunner’s barracks. It documents 8,000 years of history and gives you a glance from Neolithic times to the modern day of the region. The highlights are a perfectly intact set of three golden Roman helmets from 4th century A.D and the 19th-century costume exhibit.

Trg Slobode or Freedom Square It is the largest central city square of the country, built in the 18th century. The square has several cool cafes and restaurants as well as banks, stores, and an art gallery. The west side of the square has a Non-Renaissance style Town Hall built-in 1895. The freedom square is also one of the main concert venues of Novi Sad.

The Name of Marry Church

A majestic catholic church called “Name of Marry” is located on the opposite side of the freedom square. It is the tallest church in Vojvodina, with a height of 72 meters. This neogothic style landmark built during the 1848 Revolution is patterned with glazed tiles from Hungary’s Zsolnay manufactory. The stained-glass windows are from Budapest and the main altar in the apse was made in Tyrol.

A quick walk away from freedom square lies a Vladičanski Dvor also known as Bishop’s Palace located at the end of the Zmaj Jovina Street. It was rebuilt in 1901 in the Serbian-Byzantine style. It is a residential place of the Serbian Orthodox Bishop of the Diocese of Backa. A visit to Bishop’s palace is integral to any sightseeing trip in Novi Sad.

Your attention will be stolen by Novi Sad’s sandy beach on the Danube. The beach is located near the liberty bridge. There are a lot of fun activities to indulge yourself in. There are several restaurants and bars on the beach to enjoy traditional and international cuisines along with a mini-golf course, playgrounds, and sports facilities. The strand beach also serves as a live set for the EXIT festival.

Almost everyone who visits Laza Telecki is taken by its warm vibe. It has become a brand of nightlife in Novi Sad. This narrow street in the downtown pedestrian zone is full of cafes, fancy restaurants, bars, and clubs which makes it a popular tourist hangout spot. So, if you are looking forward to having some fun time this street offers the intimacy of the amenities with a charming view.

The Petrovaradin fortress is the most recognized historical and cultural heritage to visit in Novi Sad, Serbia. It is a signature city attraction for tourists. It is situated on the right bank of Danube. It is the second-largest fortress in Europe, dates back to the 17th century. This magnificent fortress dominates the skyline and offers a picturesque view of Novi Sad…READ MORE

If you are interested to visit Novi Sad in a day-trip from Belgrade you can also visit those places nearby:

Petrovaradin Fortress The Petrovaradin fortress is the most recognized historical and cultural heritage to visit in Novi Sad, Serbia. It is a signature city attraction for tourists. It is situated on the right bank of Read more… 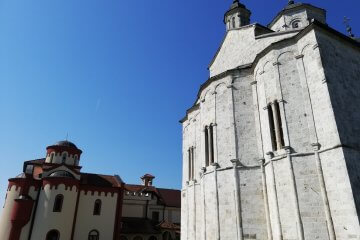