Sandstone sculpture typical is the culture of Lepenski Vir, with an aspect between human and fish, from the period of 6,300 to 5,900 BC, which can be seen in the new museum that the Serbian Government has dedicated to these prehistoric people, the first in European territory.

The first prehistoric village in European territory dated back more than six thousand years ago and was located in the Serbian area of Lepenski Vir, which gave the name to a brilliant culture of prehistoric man.

Now, more than 40 years since it was discovered, this town has been protected in a modern museum that invites you to travel to the past and know the life, beliefs, and customs of that time so far, the Mesolithic.

The wide and elegant building of glass and metal construction of white color, financed by the Serbian Government, offers to the visitor, in addition to the artifacts found, an interactive virtual tour of the town and a documentary about the first archaeological excavations in the site.

There, on the banks of the Danube River, the millenarian attempts of man to establish an economic and sociocultural system culminated.

“It is the oldest organized human settlement in Europe,” Vladimir Nojkovic, in charge of Lepenski Vir, told the Tourist Organization of the city of Donji Milanovac, 180 kilometers east of Belgrade.

“That means that the people there planned their settlement, planned their houses, had economic and social life organized in that settlement,” he added, and stated that in Lepenski Vir, that way of life was given ” between 6,500 and 6,300 BC “.

In this place, protected by the Danube and the steep rocks as natural barriers, a genuine, unique and autochthonous culture was born, specific architecture and monumental stone sculptures, for the first time in Europe.

According to the research of the well-known Serbian archaeologist Dragoslav Srejovic, presented in his book “Lepenski Vir”, the town was built on a vast “terrace”, similar to the letter “U” and with houses arranged in parallel with those lines.

The architecture of the houses was precisely defined: an isosceles triangle cut exactly one-fourth the length of its equal sides. The entrance always overlooked the river. In the central part of the town was the largest house, possibly the temple, and a plaza.

The builders of Lepenski Vir had knowledge about the measures, proportions, shapes, and dimensions that they knew how to apply in their architecture. Although their mathematics is not what we know today, it seems to have been a kind of mystical calculation in which they based a vision of the microcosm and the macrocosm of that culture, according to Professor Srejovic.

In the center of the interior of the houses were the rectangular stone hearth, an altar and the sandstone sculptures of their divinities, images that are a combination of humans and fish, and in which they believed deeply.

“They lived by the river, and water was the source of their life. They lived on fish, which was their food,” Nojkovic explained, and said that in the early stages of his life in that area that fish constituted 70 percent of their diet.

“Possibly because they ate fish were much higher than the rest of the people who lived in the territory of Europe at that time, an average man was between 1.65 and 1.70 meters.” At that time, that was very high “, Nojkovic said.

“The longest skeleton found in Lepenski Vir is 2.03 meters, it was enormously high at that time,” he said. And numerous people from the world travel to see by themselves.

Also, in addition to figures of deities, they elaborated sculptures with ornaments that apparently are a type of signs yet to be deciphered.

Lepenski Vir was discovered in 1967, and the value of what was found immediately put Lepenski Vir in the important archaeological maps of the world which every geography lover would love to visit. There were found 136 houses and temples in seven towns that succeeded each other in the period between 6,500 and 5,500 BC.

The Neolithic revolution, which lived between 5,900 and 5,500 BC, as well as contacts with other cultural groups, formed upstream influenced the change of their customs, life, and religion.

If you are going want to have a tour to Golubac Fortress or some another place in Djerdap National Park, Lepenski Vir is a definitely place that you need to consider to include in your trip. 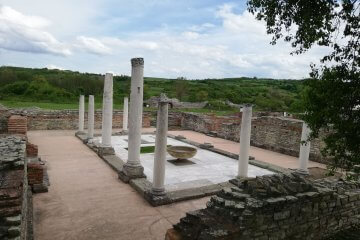 Felix Romuliana, The Most Important Roman Palace in Serbia to Visit   Serbia is an exceptionally rich country when it comes to the Roman legacy. 17 emperors were born here, and built palaces, temples, and Read more…